Denver is Playoff Bound for Now 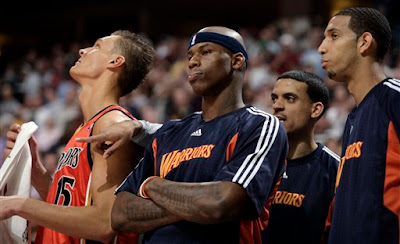 (AP Photo/David Zalubowski)
(Boulder-CO) It took a season-high offensive performance from Kenyon Martin, and a well balanced attack by the rest of the Nuggets, to defeat the Warriors, 119-112. Five Nuggets recorded double figures in scoring and grabbed at least seven rebounds while the Denver bench outscored the Warrior bench, 39-18, to reclaim the eighth seed in the Western Conference playoff landscape.

In the first half, the Nuggets' passing was superlative. Denver dished out 22 assists on 26 made baskets including a slew of fastbreak points. The Nuggets were taking advantage of Golden State's poor transition defense thanks to Kenyon Martin and Marcus Camby each grabbing seven first half rebounds. Carmelo Anthony and Allen Iverson led the march of dimes with five assists each translating into a four-point lead at half, 65-61. About the only thing negative that I would add to an otherwise great first half was the Nuggets' inability to close out the second quarter. Denver was outscored 8-3 in the final two minutes allowing the Warriors to trim the Nuggets' lead down to four after it was eleven on numerous instances throughout the second quarter.
After intermission things got a little bit uncertain towards the end of the third quarter as the Warriors were still hanging around and down by only two entering the fourth. Golden State even led with just over three minutes remaining to play, 86-83, in the third before Denver once again found a way to close out the quarter with a 5-0 run to regain the lead with twelve crucial minutes to play.
That's when the Denver reserves stepped up their game. Eduardo Najera, J.R. Smith, and Linas Kleiza combined to score the first 20 Nugget points in the fourth quarter's first 6:10 as the Nuggets mugged a playoff position from the weary Warriors. Eduardo Najera's back-to-back three's capped off the 20-10 jump start the Nuggets used to down Golden State and the over 19,000 Nuggets fans in the Pepsi Center carried Denver to a, 119-112, victory!
Kenyon Martin's eleven rebounds fit nicely with his season-high 30 points to lead all scorers. Carmelo added 25 points, seven rebounds, six assists, and three steals, and J.R. Smith poured in 20 points, seven assists, and five rebounds to lead all bench players in scoring. As a team, Denver out passed the Warriors 36-24 in the assist column, out shot the 'Dubs 46-42% from the field, out blocked G-State 8-5, and out thieved Nellie and Co. 9-2. I'm out of nickname for the Warriors, and just as fittingly, the Warriors are now on the outside of the playoff picture looking in.
This game was huge, there's no doubt about that, but the rest of the remaining regular season games are all going to have a certain mounting pressure for the Nuggets to sustain their winning ways right into the playoffs. There is still ten more games for the Nuggets to persevere through, but now Denver has no one to blame but themselves if there is a slip and they miss the postseason. Which, in all honesty, is fine by me because this team seems to play better with their backs against the wall. It's some kind of motivation for them. Plus, the Warriors play the Mavericks next and that is only good news for the Nuggets as one of the two teams battling for a playoff birth has got to take the loss. And if it's the Mavericks... The Nuggets may very well be sitting as high as seventh in the playoff seeding after Monday night's docket of games.
But for now, the Mile High City is buzzing with NBA playoff atmosphere. The postseason lock Phoenix Suns are coming to town on Monday to try and knock the Nuggets off their current five-game winning streak. Try as they may, and try they will, but I don't see the Nuggets getting punked by the Suns like they did earlier this season.
Ten more games, I mean uh... Wars! Yea, that's more like it, ten more wars!
Go Nuggets!
Posted by Nugg Doctor at 8:29 PM

Tonight was the loudest the Pepsi Center has been all year. Camby and AI had off nights but everyone else played great. Hopefully they keep this run going.

Great game all the way around. I'm glad to see JR playing with such consistency of late. It always bugged me that Karl was so down on him at times, and especially badmouthing him in the media. I hope March proves to be the turning point in his game and that he's blossomed into the Ginobili-type, game-changing potential he's shown in the past (except even more athletic!). Go Nugs!

its the team man! not individual performances, heh heh

Anyway Jazz lost tonight. We're 2.5 games out of a 4 seed, with 1 head-to-head against Utah to come.