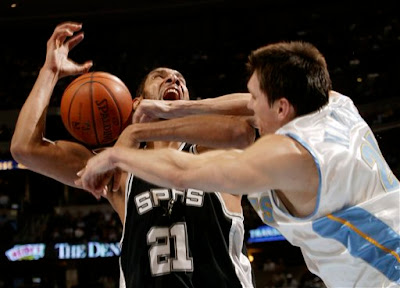 My question is -- with Chucky Atkins back, what do you expect his minutes to be? And where will he fit in the rotation?

By the way, I'm looking forward to Monday night at the ESPN Zone to watch the Nugget game and your commentary simultaneously!! What time dhould us fans be there would you guess? And is it true you will be awarding some tix to a Nugget game?

I think Chucky's minutes will be very limited to start, gradually getting more and more as he proves his position with this team.

Chucky needs to be a leader. We have all the scoring we need. Sure, I want him to produce offensively, but Atkins does not need a set amount of shots. Rather, just good shots while being a steady hand at the point.

I'm glad you asked that, Btalk. I will be posting a breadown of the facts in a few.