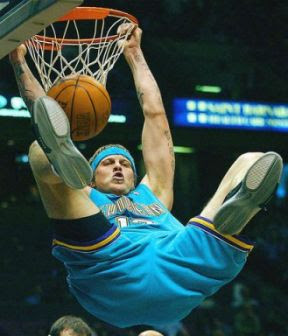 (Boulder-CO) Marc J Spears of the Boston Globe included this snippet on former Nugget Chris "Birdman" Andersen and his pending status with the NBA in his article regarding the Celtics, "Once forward/center Chris Andersen gets reinstated by the NBA, the Hornets are expected to re-sign him, according to an NBA source. If Andersen became a free agent, Boston would be expected to have interest."

First of all, I have always been on the Birdman's side. The guy just has a charisma that forces you to like him (think Eduardo Najera "cool" and add some mystery and danger). But I think one of the main challenges of Andersen's case has to do with a clause that states Chris can not enter anymore dunk contests for the rest of his professional career.

Good luck, Birdman. My hope is to see you in an NBA uniform real soon.
Posted by Nugg Doctor at 7:40 AM

AI laughin at him lol.