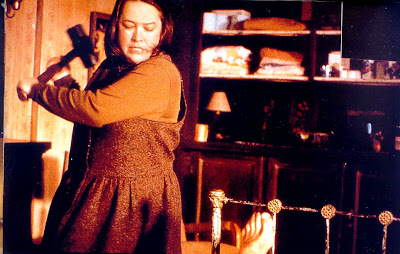 (Boulder-CO) Welcome to a game with more ailing ankles than the film Misery. Carmelo Anthony is going to make his return tonight after a twelve-day absence since spraining his ankle back on January 21st on Kobe Bryant’s foot and the Bobcats’ Raymond Felton and Gerald Wallace are both questionable after sitting out last night’s fourth quarter against the Warriors with a couple of unfortunate twists too. High-tops anyone?

Tonight’s game will be a homecoming of sorts for recently acquired “Earl” of the big men, Earl Boykins. The former Nugget was just recently signed to the Bobcats two days ago and should receive a very warm welcome from Denver fans who used to go crazy for the five and a half foot Boykins.

But aside from that side story, the Nuggets need to be thinking revenge on the Bobcats for a, 119-116, loss handed to the Nuggets back in mid January. And with Carmelo (who I will guarantee has not forgotten how the last meeting between these two teams played out in the final seconds) making his return, I think the Nuggets are primed to payback the Bobcats.

On January 14th I wrote, “The Nuggets once again outplayed the ‘Cats in the third, but a dismal 17-point offensive showing in the forth in combination with Gerald Wallace’s continued offensive barrage were too much for the Nuggets to counter. Wallace scored nine of his game-high 40 points in the final quarter with the nail in the coffin being a three-point basket to put the Bobcats up, 117-112, with only 45 seconds remaining in the game. Denver did have one last chance to win with the score, 117-115, and Carmelo Anthony at the line, but ‘Melo was unable to tie the game with the second attempt missing and being rebounded by Anthony before he shuffled his feet and turned the ball over on the traveling violation. Ironically, ‘Melo finished with a team-high 35 points but struggled from the free-throw line all night concluding just 11-17.”

So, in addition to losing their last two straight games, the Bobcats played last night in Oakland and should be weary on the backside of back-to-back road games. Plus, the Nuggets have won seven straight on their home court which is their longest home winning streak since a 12-game run from March 16 through April 19, 2005. Other notable statistical facts that have fruited the Nuggets wins as of late are when Marcus Camby rejects five or more shots Denver is 14-4 so far this season, the Nuggets are 19-1 now when AI records a double-double of points and assists, Linas Kleiza has scored in double figures in the last six games of which the Nuggets are 3-3, and the Bobcats are 4-15 so far this season on the road which should play into the Nuggets favor.

My last point of emphasis tonight is concerning the Nuggets unexplainable predisposition to giving up season, and career, high performances to players on the opposing team. The last time these two teams met, Gerald Wallace scored a season-high 40 points on the Nuggets which are also the most points Denver has surrendered to a single player all season. With that being said, if the Nuggets can avoid allowing any of the Bobcats to break loose like Gerald Wallace (who might not even be able to play tonight- fingers crossed)did in the first match up, Denver should be able to get a win in tonight’s game. Once again the Nuggets are the far superior team in most statistical categories, including scoring all but straight across the starting fives, and a loss tonight would be a real stub of the toe. I’m going to go ahead and say Denver wins by at least six on the back of Carmelo’s return while playing spoiler to Earl Boykins’ home coming in the Mile High City.

Go Nuggets!
Posted by Nugg Doctor at 7:13 AM