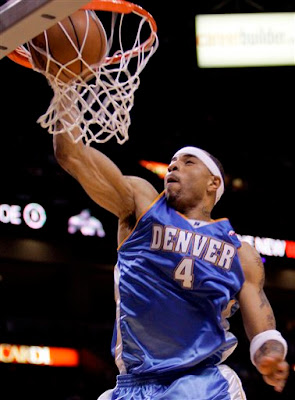 (AP Photo/Alan Diaz)
(Boulder-CO) The Denver Nuggets may want to remember a few things from tonight’s game. First of all, make a note for next year that says the Heat are a much better team than this year’s record may indicate. Another is the feeling of coming together as a team when Carmelo Anthony and Allen Iverson are having off nights and still finding a way to win. However, I can’t say how much of a different, and improved, team the Miami Heat looked like tonight sans Shaquille O’Neal despite losing to the Nuggets in overtime, 114-113.
In an overwhelmingly sloppy first half overall for the Nuggets, something has to be said about J.R. Smith’s effort in the first 24 minutes. J.R. was lighting it up from downtown taking a break at halftime with 13 points and two assists on 3-5 from beyond the arch in a performance which included a four-point play. Smith was also playing very solid defense on Dwayne Wade and was a visible spark off the bench.
Unfortunately, the otherwise sloppy play I mentioned was affording the Heat to enter intermission shooting 61% from the field and holding an advantage in the rebounding battle 22-14. Carmelo was the best Denver rebounder finishing the half with a team-high four rebounds with Marcus Camby uncharacteristically grabbing just two rebounds in the first 24 minutes. Carmelo Anthony scored 14 points to lead Denver in points, but the otherwise lackadaisical Nuggets found themselves down to the league’s worst team, 63-57.
In the third quarter, the Heat continued their hot shooting but the Nuggets hung around largely in part to Kenyon Martin and J.R. Smith shouldering much of the scoring load. Kenyon Martin was a perfect 6-6 from the field scoring twelve points in the quarter including six straight over a four minute span. J.R. continued his torrid shooting by hitting a three to end the quarter and managed to carry over the hot hand into the start of the fourth with a total of five straight three’s to give the Nuggets a, 93-91, lead with under nine minutes to play in the game. J.R.’s eight made three-pointers for the game is a new career-high, but it was his defense on Dwayne Wade in clutch moments of the game that really sealed an overall great performance.
The game would swing back and forth over the course of the fourth quarter and with the Nuggets having the final shot in regulation and the game tied. The Denver offense went flat and the final look at the rim for the Nuggets ended up being a fade-away by Allen Iverson that was snuffed out Dorell Wright.
Enter overtime where the Nuggets would strike first and never look back. Despite having an off night shooting, ‘Melo reemerged as the Nuggets’ bread and butter scoring six of the Nuggets twelve overtime points and gave George Karl his 14th double-double performance of the season finishing with 22 points, eleven rebounds, and four assists for the game’s grand stat total. Kenyon Martin finished with 24 points and six rebounds and J.R. Smith’s team-high 28 points and career-high eight three’s were enough for the Nuggets to overcome a dreadful night by Allen Iverson who finished with just 16 points on 5-20 shooting.
Dwayne Wade led all scorers with a double-double of 29 points and ten assists and Shawn Marion grabbed a game-high 18 rebounds to compliment his 23 points, but Marcus Camby’s 14 rebound effort in the second half ended up swinging the battle of the boards back into the Nuggets' favor for the game, 49-46. And none were bigger than his 16th and game-sealing rebound as time expired. The Captain finished tonight’s game nearly missing a triple double with 12 points, the aforementioned 16 rebounds, and seven huge blocked shots.
The Nuggets averted disaster tonight because they came together as a team with individuals stepping up at the right times. Kenyon Martin’s 12 points in the third period were huge. J.R. Smith was instrumental in keeping the Nuggets toe-to-toe with the Heat late in the third and to begin the fourth. Marcus Camby turning things up on defense in the second half set the tone for the Nuggets comeback and Carmelo not shying away from the spotlight in overtime despite having a bad night shooting are all equal reasons why the Nuggets can fly to Orlando tonight to face the Magic tomorrow with an extra spring in their step.
Great, ugly, overtime,win, Denver.
Go Nuggets!
Posted by Nugg Doctor at 8:02 PM

Wow, I don't know how we won this game. Usually when I have that gut feeling that there's no way we're gonna win the game, we don't. By God's grace and a helluva effort we pulled it out.

As much as everyone sh-ts on JR, he came in and made it happen. Kenyon and him kept us in the game. Sure, he took a few 3's that he shouldn't have but he also hit plenty of them.

Solid line from Marcus (my fantasy team thanks him) and a few, FEW lucky breaks amounts to a solid win that shows the heart we've had lately.

I don't like going to Orlando on a back to back, but we'll see.

Nugg Doc, I figure you're a fantasy man. Worth picking up Dorell Wright and dropping Anthony Parker? Trying to figure out if Wright's recent string is a fluke. I'm sittin' pretty in first but I need points.

Hey Nugg Doc...it's funny how two people can watch the same game and see different things!! Personally, I must have been using the restroom or raiding the fridge when J.R. was playing all that great defense!! True, he managed to almost stay between D-Wade and the basket, but his weak side help, or lack thereof, is what I continue to see. Also, he did make a careet high number of threes, but, I can't help but notice the poor shot selection on missed threes, and even on some made ones. If they didn't happen to go in, they would be considered terrible shots at the time. But, alas, more of them went in than did not...call me crazy, but Karl would not say this was any kind of a "coming of age" game for a meathead!! Keep up the good writing though, at least you understand the game, which is more than can be said for many locals sports journalists.

A tough win but it counts just the same in the standings as a win over Dallas.

I am concerned with the starting line up, there is really no reliable 3 point threat. If Melo can't hit the mid range shot and AI isn't on then we have no offense. AC has given us some wins but he is no Steve Blake.

JR made some shots but Karl had to sit him at the end of the game for taking bad shots and playing bad defense. If only we had a coach that could get to JR and tell him that jumping from the free throw line to the basket isn't a good play.

But at the end of the day they won, hopefully they didn't blow everything and can pick up another win in Orlando tomorrow.

I was so happy during this game despite the ugly. I love it when JR gets in that groove and I hope Karl noticed how hard he plays and how much energy he always brings. This game reminded me of the game that I saw in person last year where JR hung 7 threes on the Heat for a career high 37.

Oh, I'm definitely still an advocate of the 'talent lineup' (which is what they were running most of the night) with JR instead of Carter. They need to play that lineup more often, because it really is insanely potent offensively.

Anyway, I hope this is a sign of better times to come, and if we can win tomorrow in Orlando, we'll be in pretty good position for the stretch run. How about the hustle from Wade? This game was great to watch all-around... very exciting.

I saw this game last night from two rows behind the Heat bench. I was expecting to get beat up by both the Heat bench and the fans. Extremely exciting thriller, I couldn't sit from half-way through the 4th and overtime. I wish I could drive up to Orlando to see them today but no such luck...

The first half was disgusting allowing the worst team in the league shoot 61%. But like Doc said the Heat are a much better team than their record indicates and Marion looks like he fits right in. In the first half, the Nuggets defense sucked terribly. Whenever Marion and Wade were coming down the lane, the Nuggs would open up the lane like Moses parted the Red Sea. We were vastly outrebounded (cant remember the exact stats) and outhustled by the end of the first half.

JR and K-Mart did a great job of holding Denver up despite Melo and AI having off nights. Its good to see other players step up as there will definitely be nights like that. It was an ugly win but a great fight none the less. The Heat fan beside me said to me that "Well, what's the big deal, Denver beat the worst team in the league by a point." I don't care as long as it goes on the W column for Denver.

But really, we need to start playing defense from tip-off, not half-way through the 3Q. That would keep us from getting into holes and always having to climb out of them.

Does George Karl never gets up from his seat...?

Well it appears the Mavs won the Jason Kidd lottery. We've got to go ahead and make this Ron Artest deal, otherwise I don't see how we can compete in the playoffs.

Well it appears the Mavs won the Jason Kidd lottery. We've got to go ahead and make this Ron Artest deal, otherwise I don't see how we can compete in the playoffs.