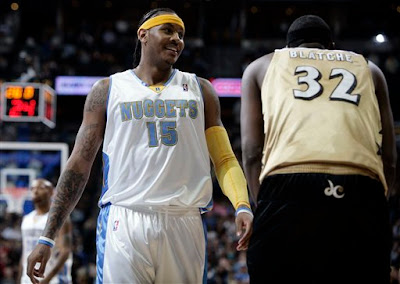 (AP Photo/David Zalubowski)
(Boulder-CO) It was just one of those nights for Carmelo Anthony, the Nuggets, and even mascot Rocky. Anthony came out and dropped 20 points, Denver put 30 points on the scoreboard, and Rocky tossed in a half court-backwards granny shot all in the first twelve minute period! ‘Melo would continue his offensive onslaught throughout the night to finish with a career-high 49 points as the Nuggets controlled everything down to the concession stands (Steven Hunter may have even served up a couple of nachos!). Needless to say, the Nuggets trampled the Wizards, 111-100.

In the first half, it was all Nuggets all the time. Denver went into intermission with a nine-point lead, 56-47, after Carmelo had single handedly outscored the Wizards in the first quarter, 20-16. The defense could have been better in the second quarter, which the Nuggets lost, 31-26, but the pace of the game was heavily favoring the Nuggets and Denver seemed content feeding Anthony the ball as he exploited Andray Blatche (who thinks he is the best player to come out of Syracuse) inside and out.

By the end of the third, Carmelo had already scored 40. Just six points shy of new career-high, Anthony was on the bench to start the fourth quarter with the Nuggets leading by 17 points. But, with six minutes remaining and the lead cut to ten, George Karl was not about to let an otherwise magical night go to waste. It was time for the Nuggets All-Star to come back into the game and cement the win and that is exactly what he did with nine more points setting a new career-high. Wizards’ Coach Eddie Jordan made this comment in relation to Anthony returning to the game, "I thought it was very classless to close the game out. I have my opinion. I can say what I want to say. That's what I thought it was."

Classless? Eddie, have you done your homework on the Nuggets? They have been known for blowing leads down the stretch thus making games with teams like yours a whole lot tougher than they need to be. This is the NBA, Eddie, and if you can’t lose like a professional how do you expect to ever win like one?

Actually, on second thought, I don’t care if the Wizards win another game his year because the Nuggets have swept the season’s series against Washington and a statement like that is just a bitter man venting his frustrations.

Anyways, I mentioned that it was just one of those nights for the Nuggets (despite the Pepsi Center running out of carbonation forcing me to drink my whiskey with flat Pepsi) and the box score can back me up. The Nuggets shot 56% from the field, 91% from the free-throw line, and everyone who entered the game for the Nuggets scored. Allen Iverson recorded a double-double of 18 points and eleven rebounds to improve Denver’s record to 21-2 with such an occurrence. Kenyon Martin scored 16 points and Marcus Camby hogged up all the boards with 17 huge rebounds. And, per usual, Linas Kleiza was the high man off the bench for the Nuggets with ten points and two rebounds despite going 0-5 from the land of plenty.
Anthony became the third Nuggets player to top 40 points in a game this season joining Linas Kleiza (41 against the Utah Jokes) and Allen Iverson (51 against the Los Angeles Lakers) in this elite company. It should also be noted that Denver is 11-1 against Eastern Conference teams at home and Utah lost last night, 117-104, to bring the gap to a single game in the Northwest Divisional race for first place with both teams now having 19 losses on their record.

Like I said, it was just one of those nights for Denver.