Boston Loses to the Western Conference 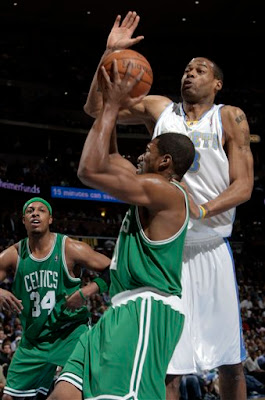 (AP Photo/David Zalubowski)
(Boulder-CO) It hadn’t happened through the first 50 games of the season, but the Denver Nuggets accomplished what no other Western Conference team had by toppling the Celtics, 124-118, tonight at Pepsi Center in front of the largest regular season crowd in Nuggets franchise history.
With the most fans ever to file into the Pepsi Center on hand, all the Nuggets raised their games to new heights. In the first half, both teams played to a stalemate of 62 points after Denver had once led by as many as nine midway through the first quarter. Ray Allen had scorched the Nuggets for 14 points in the first twelve minutes before going cold in the second while Carmelo Anthony led all Denver scorers with 18 points at intermission.
In the second half, the Nuggets applied more defensive pressure by way of a two-three zone and the Celtics were visibly bothered as they only scored 22 points in the third quarter. Marcus Camby was swatting shots all over the place, Kenyon Martin played fantastic one-on-one defense on Kevin Garnett, and the rest of the Nuggets were scrappy on the Celtics’ perimeter shooters. Coincidentally, the good overall defense by Denver translated into even better offense as the Nuggets put 26 points on the scoreboard by way of five different Nuggets scoring.
Entering the fourth, the Nuggets were in foul trouble as Kenyon Martin would eventually foul out and Marcus Camby and Carmelo Anthony would have to play the duration of the final quarter with five fouls. However, there was no need to worry as the Nuggets once again relied on balance scoring, including three three’s (back-to-back bombs by Linas Kleiza and one by Marcus Camby!), to close out an absolutely fantastic team effort. Denver even had to overcome one of the most horse manure calls that I have seen in all my years of watching NBA basketball to subdue the struggling Celtics late in the fourth quarter. With 20 seconds to play and the Celtics down by six, 121-115, Boston called its final 20 second timeout where they drew up a play for Ray Allen to launch a three. Jesus Shuttlesworth got the shot off, but the attempt was well short and way right, and when Carmelo Anthony grabbed the errant shot referee Bennie Adams blew his whistle and ruled the rebound a goaltend! It was the single most ridiculous call I have ever seen made since, come to think of it, quite possibly ever, but thankfully the Nuggets made enough free-throws to stave off any last ditch efforts by the Celtics.
The box score for the Denver reflects just how inspired the Nuggets played, not only as individuals, but for once as a team. Immediately, Marcus Camby narrowly missing another triple-double by one blocked shot is just a reflection of just how great of a season the Captain his having. Marcus finished tonight’s game with eleven points, 13 rebounds, nine blocks, three assists, and three steals in 40 minutes of action. And as I mentioned before, Marcus hit a three which was the nail in the coffin from the right corner with just over two minutes remaining. The bomb gave the Nuggets a seven point lead, the ability to make the rest of the game a free-throw contest, and the Cambyman his third make of the year from downtown.
Kenyon Martin also played spectacular. Despite having a throat cold, K-Mart gave the Nuggets 28 tough minutes on both offense and defense en route to scoring 19 points, grabbing six rebounds, swiping two steals, and swatting a shot before fouling out with just under two minutes to play in the fourth quarter. Martin played excellent one-on-one defense on all of Boston’s big men and was an efficient 8-12 on the offensive end. I particularly enjoyed how Martin allowed the game to come to him, and when it was his time to produce, he had no problem doing so.
Offensively, the Nuggets were led by Carmelo Anthony. ‘Melo scored a team-high 29 points and grabbed seven rebounds, including a 12-13 performance from the free-throw line. Anthony received a lot of help from Allen Iverson who shot his way out of a mini-funk to finish with 28 points on 7-16 from the field while dishing out nine assists. The Answer also grabbed seven rebounds, but uncharacteristically did not record a steal. It should also be noted that the Nuggets out shot the Celtics in every category. Denver made 51% from the field in comparison to Boston’s 44% and most importantly made 8-17 of their three-point attempts.
So, bring out the little people because ding-dong the witch is dead! The Celtics have finally lost to a Western Conference foe bringing their record against the left coast to 16-1. The Nuggets' next game is on Friday in Chicago against the Bulls. Every game matters, Nuggets Nation. You know it, I know it, and apparently, the Nuggets got the memo too!
Go Nuggets!
Posted by Nugg Doctor at 9:42 PM

The Nuggets are getting me through law school.
I eschewed cable for the first year (distraction), and this blog has been key as well. You really know what you're talking about, which is refreshing.
I've previously posted that I think they should have dealt for Bibby, but too late.
Doc, what do you think of the Delonte West rumors?

Just read the recap on the game both here and on ESPN. Sounds like a great game, wish it was televised nationally. I am very impressed by the Nugget's box score... 51%FG against the Celts while holding them to 44%... impressive. All players scoring, with 6 of them in double figures. Also, the Nuggs were taking good shots with all players shooting about 50%.

This shows what we knew all along the Nuggs can beat any team in the league but they have to put that effort in consistently. Play defense, take good shots and pass the ball.

Nice game summary Nugg Doc...as I watched the game I kept thinking about this...those who want the Nuggs to make a trade need to consider that the team, as it stands today, can still get better. One play, in particular, stood out. Martin gets beat to the hoop, Camby leaves his man to help, Melo doesn't rotate to secure Garnett who gets the offensive rebound and dunks. This is fundamental basketball. Not just the rotation but the ease at which the Nuggets get taken to the hole. Also, the Nuggets would do well to watch and copy the Celtic's "movement without the ball" (or should I say, listen to Doug Moe as well). Additionally, missed free throws at crunch time, by A.I. and Carter, the two guys most needed to be deadly from the line, kept the Celtics in striking range. My point...forget Artest, et al, just get better at doing the "little things" championship teams do.

that game was just electric.

that being said Doc, I know you and other Nug fans noticed that dufus kid not watching the game and watching his DipNDots before he got clocked at courtside. Step it up, kid.

Great to hear about the law school, Robert. I'm humbled by your opinion. As far as Delonte West goes I doubt the Nuggets are going to deal anyone by the deadline in any sort of band aid move.

I agree with you, btalk. The Nuggets can certainly improve in a lot of the little areas that seperate the good teams from the real contenders. The Nuggets got a lot baskets to go down, down the stretch that really masked some bad decisions.

Commish! What's good baby? Yea, I saw that little guy take one for the team. Damn you, Rondo!

It's funny you should dismiss the "band-aid" trade, which is just what I wanted to hear.
Ever since the calls for a trade started, it took on this sort of "sky is falling" dialogue that really made everyone feel more nervous about the season than they should be. The Artest thing? Garbage. Karl doesn't want to deal with him, there's enough personality on this team.
And why trade Kleize, when he's developing well and you'd be bringing in someone much older? A trade like that would have been putting all the chips on this season, which never works. Look what happened to the Lakers when they brought in Malone and Payton. Eff that.
Go Nugglies. When they play like a team it's like watching the Globetrotters.