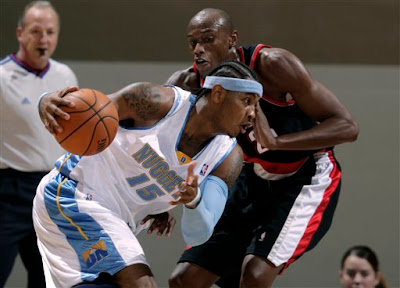 (AP Photo/David Zalubowski)
(Boulder-CO) The Denver Nuggets start their preseason off 2-0 after tonight’s, 118-102, victory over the Portland Trailblazers. In a game that I knew the Blazers were offensively outmatched in, at one point in the fourth quarter Denver led by as many as 27 points after the starters had long been put away. Important to also keep in mind was how Denver was without the services of forwards Nene, Martin, and Najera or guards Chucky Atkins and Anthony Carter.
The big story though is how J.R. Smith did not log a single minute of play in tonight’s game. I talked with a few Nuggets insiders this morning and not a single one of them mentioned any kind of injury J.R. might have sustained in practice or in the last contest, so I’m wondering if there may be something else going on behind the scenes, but more on that later…
The big offensive story from my area of emphasis tonight was the play of Linas Kleiza. LK scored 19 points on 6-11 shooting including 6 of 7 from the free-throw line, passed out three assists, and grabbed two boards in 26 minutes of action. Linas also played some pretty solid defense both on and off the ball. His counter part, Von Wafer, while not playing as effectively as Kleiza or scoring as much played as good if not better than on Tuesday night against the Clippers. ‘Nila started tonight’s game and finished with ten points, two assists, two rebounds, and no turnovers in 22 total minutes played. I think that this game was just as solid as Wafer’s first game because his defense was much better despite still committing four fouls. And in his defense he did pick up a couple of those fouls helping out teammates on penetration and did so in a fashion that prevented easy Portland scores.
Another area that I really like for the Nuggets so far is the high percentage they are shooting from the free-throw line. Denver has started this preseason shooting 80.4% from the charity stripe, including tonight’s collective, 35-42, including no player missing more than two attempts. This is just another area in which the Nuggets can improve on from last season because in many cases this is an area that can also translate into a few more regular season wins from tight games here and there that are won and lost at the line.
And as with no effort at all, Carmelo once again led the Nuggets in scoring with 22 points to go along nicely with his seven rebounds, five assists, and three steals. Sometimes it seems like ‘Melo is pretty much unstoppable offensively, but it is his passing and willingness to hit the boards that proves there is a continued maturation process still going on with the Nuggets fifth year star. More and more, even ranging back to this past summer’s FIBA games, ‘Melo has been rebounding with an increased regularity.
The next Nuggets preseason game is on Sunday in Detroit against the Pistons, but until then I’ll be keeping my ear to the streets and talking to some people who might be able to shed some light on the situation as to why J.R. didn’t play tonight.
Go Nuggets!
Posted by Nugg Doctor at 9:42 PM