AI Is the Player of the Week 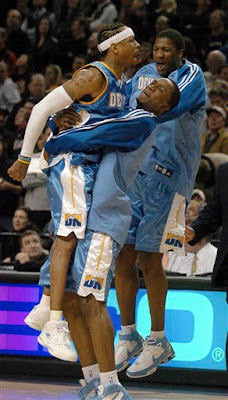 (Boulder-CO) The Denver Nuggets’ Allen Iverson was named the Western Conference Player of the Week, respectively, for games played Monday, April 7, through Sunday, April 13. Iverson led the Nuggets to a 3-1 week, and was second in the league in scoring with 28.8 points per game on .533 shooting, to go along with 6.8 rebounds. Iverson was second in the West in steals with 2.75 steals per game. It is Iverson’s third Player of the Week nod this season (Nov. 18, Jan. 6). Denver can clinch a playoff spot with a win or a loss by Golden State.