Kobe Bryant is a Bad Man 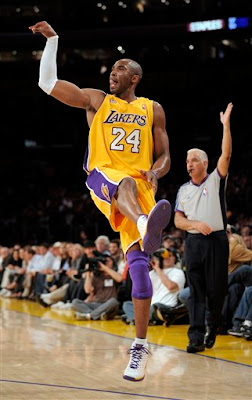 (Boulder-CO) Kobe Bryant scored 49 points to catapult the Lakers into a commanding 2-0 series lead over the Denver Nuggets by way of this 122-107 loss. Denver once again showed little bend on their way to breaking defensively and allowing 122 points.

The first quarter was a good solid start for the Nuggets offensively. Denver got the fast break going which enabled the Nuggets to score 32 points in total. Linas Kleiza gave the Nuggets a nice boost with six quick points in the early goings, but it was Kobe who trumped all with 20 points in the first twelve minutes to bring the Laker point total to 33 points while falling just two shy of Elgin Baylor’s playoff franchise record of 22 points scored in a quarter back in March of 1962. Marcus Camby made a solid impression on the glass with six rebounds while rejecting two shots, including Jordan Farmar’s last second attempt that was emphatically swatted out of bounds to close out the first quarter.

Unfortunately for the Nuggets, George Karl substituted for Eduardo Najera at the end of the quarter causing a mismatch on Kobe Bryant. Karl also inserted Nene which created a bad match-up with the cagey Pau Gasol. So, with the Nugget reserves now in the game the Lakers took quick advantage with a 14-4 start to the second quarter. Kobe would continue his offensive onslaught by connecting on ten consecutive field goal attempts spanning from the first throughout the second quarter as the Laker lead would balloon to eleven points as the Nuggets played with ‘Melo as the only starter in the game through the six minute mark.

However, after trimming the lead down to just five with under two minutes to play, Denver once again failed to close out the quarter and allowed the Lakers to swell their lead to ten going into the half largely in part to Kobe’s 25 in the first 24.

Things weren’t looking good at all for Denver at intermission. The Nuggets had only five total assists in comparison to L.A.’s 17. The Nuggets also turned the ball over seven times resulting in eleven Laker points while only forcing L.A. into three turnovers for the same amount of points in return. And to further illustrate how badly out of sync the Nuggets closed out the first half, Allen Iverson was the only starter in double figures in scoring with twelve points and he was primarily assisted offensively by J.R. Smith who came off the bench with ten points. The Nuggets were also collectively 0-10 from downtown (’Melo was 0-3) while L.A. hit six out of its twelve attempts from long distance.

The Nuggets started slowly in the third, but after Carmelo Anthony hit the team’s first three-pointer and drew a foul after grabbing an offensive board the Nuggets were down by just three with a shade under the seven minute mark to play. Denver made it’s way back into the game by pressing the issue off of Laker misses and, despite not connecting on many buckets in transition, the Nuggets were relentlessly attacking the offensive glass and getting to the free-throw line where Marcus Camby’s two made free throws brought the game within one, 66-67. On the next L.A. possession a steal by Allen Iverson led to an outlet pass to Linas Kleiza for the jam to give the Nuggets their first lead since the first quarter at, 68-67.

Denver switched into their match-up two-three zone for the remainder of the third period, but every time Kobe Bryant would penetrate and dish it would lead to easy scoring opportunities for the Lakers. Made baskets are hard to run off of and with the mismatches created for L.A. by Eduardo Najera’s entrance back into the game the Nuggets found themselves down by eight again with two and a half minutes to play. Najera’s rotations were late, his post defense was porous, his feet slow, and the onus of the disadvantage he puts the Nuggets in on the boards against a big team like the Lakers falls squarely on George Karl. With Kenyon Martin in the game, the Nuggets have toughness and a guy who can realistically, or at least physically, bother Kobe Bryant even the slightest bit. But, with Najera, the Nuggets were exposed as being soft inside and slow afoot on defensive rotation on dribble penetration.

And as quickly as the Nuggets fought their way back into the game, The Lakers’ lead was just as quickly pushed back up to ten by the quarter’s completion. Kobe Bryant slipping backdoor, catching an alley-oop, and proceeding to throw it down on the flat-footed Eduardo Najera and a Sasha Vujacic trey combined to once again leave the Nuggets on the short end of the deal to close out yet another period and back down by ten.

Once in the final quarter, the Nuggets trimmed the Lakers’ lead in half on the back of two consecutive three’s by J.R. Smith early, but the Nuggets’ Swiss cheese defense just wasn’t enough. That in combination with two crooked air balls by Marcus Camby in the quarter’s first three minutes and the Nuggets were clearly going to play the role of their own worst enemy. Bad shots, poor personnel management, silly technical fouls on AI and J.R. Smith, still no commitment to defense, and little sense of urgency before it was too little too late all added up to the sum of the Nuggets dropping their fifth straight game to the Lakers this season by the score of, 122-107 . More importantly the loss brought the series to 2-0 favoring the Lakers heading back to Denver.

Here’s your depressing boxscore. There's plenty in there to point to and hiss at. But if I'll highlight any one aspect of it, it is how George Karl left Edaurdo Najera in the game for that long to guard Kobe Bryant that is truly intolerable. We’ll never know, but even if Karl rolls the dice and tries out Yakhouba Diawara or Steven Hunter for a few possessions just for argument’s sake I don’t think it could have been any worse than the complete and utter dissection of Eduardo Najera that Kobe Bryant orchestrated.

I’m out of things to say and so should be the Nuggets to Kobe Bryant. He has proved to be a bad man and I don‘t think the Nuggets have an answer for him. I went out on a wobbly limb and it broke sending me crashing to the ground. Somebody call for help. Not for me (I’ll be alright) , but for the Nuggets!
Posted by Nugg Doctor at 10:03 PM

Finally being able to watch one of the Nuggets Game's Live I am extremely frustrated and actually regret watching it because I had to endure Kobe's Headshake and a couple more new moves that reminded me of Reggie Miller somehow.

Anyway, I would like everybody's your thoughts on these 2 posts:

1. How to Defend the Lakers - why haven't the Nugget's Analysts / Coaching Staff / Players figured this out?

2. History dictates that the Nuggets are done - NuggDoc probably has the exact stats of how many teams have made it back from 0-2 to win a playoff series being the stat stud and all.

Am I off base on these or do you guys see it too?

Let me know what you think.

This was probably one of the most frustrating playoff games I've seen in a while. Let's not even get to Kobe's head shakes. The Lakers played great ball but there was nothing spectacular about it apart from Kobe. If the Nuggets had done a few things right, I believe they could have taken the game. I have a few questions/comments too:

1. PASS THE DAMN BALL... At half-time, the Lakers had 17 assists on 23 FGs and the Nuggets had 5 on 20. Ball movement guys, it's not rocket science. What happened to guys moving, cutting and slashing without the ball so they'd be in the position to get to the basket. Nope, not this team everyone just stands and watches including AI. I find this extremely frustrating because he is one of the fastest players in the league (or maybe age is catching up) but I remember those days in Philly where we would run all over the court to get the ball giving his defenders a hard time. AI can draw in defenders and use that to pass the ball out to his open teammates. Wonder why the Nuggets are 22-3 (or so) when he has at least 10 assists.

2. Why do the Nuggets hate the shot clock so much? The shot clock can be your friend if you use it well. I do not understand why in a 24 second possession, the Nuggets decide to jack up a bad shot 4 seconds into the possession. You still have 20 seconds left... Bad shots that quickly in the possession not only lead to fast breaks for the other team but increase their number of possessions. Use the clock, slow down the time and PASS THE BALL.

3. If you are going to jack up those quick bad shots, then you better make those shots (Yes, Carmelo I speaking to you) and your *** better stay around for the offensive rebound and put back.

4. Who made Marcus Camby PG, why was he handling the ball and waiting at the top of the arc on most offensive plays. Dude, you're a Center get into the Post and stop with the jump shots already.

5. Defend the three point. Makes sure there is never an open man there. Make the mistake two or three times a game is fine but damn near 6 to 7 times is unacceptable.

6. George Karl... c'mon. First he decided it was better for the team and the game to show them Kimbo Slice videos rather than videos of their porous (read: non-existent) defense.
Also, when he has a group of guys on the floor doing well, why does he just destroy the momentum.
What happened to double teaming Kobe, saying he didn't see the need to... I'm like WTH? He basically torched your team single-handedly.
Also, since we have some bench warmers, how about putting those bodies to use, use them on the defensive end, they can get some fouls rather than having K-Mart foul out.

7. AI's technicals... oh Boy. You're at 3 now, I believe you get suspended at 7 in the payoffs. But at this rate, does it really matter because you might not be in the playoffs long enough to rack up 7 of them.

Kobe and the Lakers Suck.

They Push us around yet no call, yet when we try to play a little defense, we are called with a foul.
And they GET SO MANY phantom calls against us.

Kobe travels so much but no one will call it because he is Kobe Bryant.