Yup, What a Disaster Indeed! 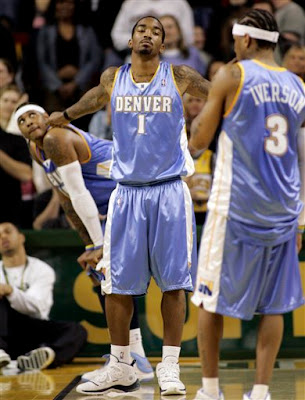 (AP Photo/John Froschauer)
(Boulder-CO) As if losing the night before to a depleted Kings team in the tightest Western Conference Playoff race ever wasn’t bad enough. Last night, the Nuggets lost their second straight game to the league’s second worst team, 151-147, in double overtime. In fact, the Nuggets defense against the Sonics was so bad that they allowed not one, but two rookies to record career high totals in points as Seattle (a team with nothing to play for) left the Denver Nuggets (a team with everything to play for) searching for answers.

So by now you have all read the recaps from all the big sites and pretty much know how this one unfolded. If you haven’t, go check this out and then come back to read the following paragraphs and tell me if you agree or disagree.

Hear are a pair of grim realities about these Denver Nuggets and the underlying story that follows this team. For starters, they are almost an unmotivatable bunch. Some people will try and tell you that it’s coaching, but after last night’s game it is crystal clear that the problem isn’t George Karl. With only a handful of games remaining and their playoff hopes on the line the Nuggets shouldn’t have to hear some cliché, “Win one for the Gipper”, speech. Rather they should just be playing so far above their heads that they all collectively suffer nosebleeds regardless of who’s in the other jerseys. But the fact remains that even with their post season aspirations on the line the Nuggets are incapable of taking care of business against teams that should be considered, “light work”. And that, Nuggets Nation to me is characteristic of a team that has motivational problems.

With that point fresh in your mind, the Nuggets refuse to play both ends of the floor. All eight Nuggets scored in double figures last night, and that’s a great effort, but if you aren’t willing to put in that kind of effort in on defense it’s fruitless. Denver allowed a team with one potent offensive weapon to score 126 points in regulation and another 25 points in ten minutes of overtime. Furthermore, the two rookies I mentioned combined for more points than the Nuggets’ All-Star tandem of AI and ‘Melo! Kevin Durant scored a season-high 37 points and Jeff Green had a season-high 35 to lead the Sonics as Seattle also out rebounded the Nuggets, 52-44, and out passed Denver, 35-33, in the assist column.

Those two reasons right there are what’s continuing to stand in the way of the Denver Nuggets. Otherwise, they’re a great team! Often times fun to watch, full of star power, and on almost every night you can count on something amazing happening. Unfortunately, the same blade cuts both ways. They are also agonizingly inconsistent, rarely ever give a full 48 minute effort, and are capable of huge let downs like last night’s debacle against the Sonics.

That’s honestly how I feel. I’ve either attended or at least watched every single game this year (and the past five years) and that’s the only explanation I can offer.

But if there is one other thing I’ll tell you about the Nuggets it’s that this season they are like a cat with nine lives. With every chance feasible to leave the Warriors in the dust and seal the deal on the eighth seed squandered, the Nuggets somehow always land on their feet no matter how far the fall. Golden State lost yesterday keeping the tie, record-wise, they are sharing with the Nuggets for the eighth seed in the hands of Denver until the two teams meet later this week in Oakland to decide who will ultimately hold the tie breaker if they finish tied at the end of the regular season. The problem is they may be running out of lives, and chances, to keep Golden State at bay with a few tough games still lurking ahead.

For now, the Nuggets need to regroup and get ready for the Clippers tomorrow night. It’s another W that Denver should be able pen in ink, but with these Nuggets you never know…
Posted by Nugg Doctor at 2:07 PM

who was defending them rookies? have they NO PRIDE?