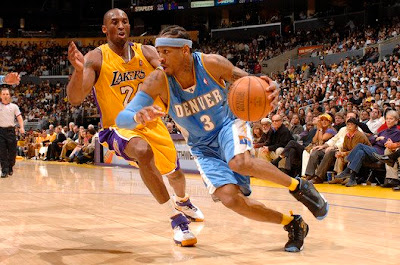 (Boulder-CO) The first place to start for the Nuggets is to evaluate what led to their 0-3 showing against the Lakers in the regular season. Recaps of all three games can be read here, here, and here. But, for the purpose of this first game in the series, I think it would be best to evaluate both teams, in their head-to-head match-ups, by position down to the sixth man. For the Nuggets, that means AI, AC, ‘Melo, K-Mart, the Camby-man, and “The Prodigy” J.R. Smith. For the Lakers, that includes D-Fish, Kobe, Lamar, Vlad-Rad, Pau and Luke Walton.

At the point: Derek Fisher and Anthony Carter are slated to start at the point for their respective teams and I would have to give the edge to Derek Fisher. D-Fish has the rings, playoff experience, buzzer beaters, and the consistent scoring ability to warrant so. Not to take anything away from Carter, who probably is a better defender, but Fisher’s 11.7 points on average includes a three-point percentage of 40% and gives the Lakers a tremendous option when passing out of the double-team. However, Carter does distribute the ball better with an average night consisting of 5.5 assists. For the Nuggets to be successful, Anthony Carter has to be a lightning rod on defense while being as efficient as possible whether shooting the ball or passing it to others on offense.

At the two: Allen Iverson and Kobe Bryant combine to form two of the three most exciting players to watch in the entire league (head nod over in LeBron’s direction). With that being said, the edge goes to probable MVP Kobe Bryant, but just barely. Once again, not to take anything away from the exploits of Allen Iverson, but without question Kobe is the most talented individual player in the league. Kobe can individually put a team’s lights out, but what makes him so special is how he has adapted his game to better serve his supporting cast. Bryant comes into the postseason after finishing second only to LBJ in scoring during the regular season with an average of 28.3 points. He also leads the Lakers in assists (5.4 per game), and can be a lock down defender when he puts his mind to it. Iverson leads the Nuggets in scoring, and was the league’s third leading scorer with an average of 26.4 points per game, but is not the defensive stopper Kobe is. However, Iverson hands out 7.1 assists a game which does keep things close when looking head-to-head at these two first ballot Hall of Famers.

On the wing: Carmelo Anthony has an advantage on anyone the Lakers have at the three spot. L.A lists Lamar Odom as their starting three on ESPN’s depth chart, but Odom rarely ever plays that position exclusively. Carmelo finished the regular season as the NBA’s fourth leading scorer at 25.7 points per and has raised his game on the boards to a career-high mark of 7.4 rebounds a game. Lamar Odom, a dominantly left handed player, is not quick enough to handle Carmelo on the perimeter and despite having two inches on ‘Melo is going to be hard pressed to keep Anthony in check down in the post. Other than the obvious offensive edge Anthony gives the Nuggets over anyone L.A. has to play at the three, Carmelo needs to give the Nuggets a shot in the arm on defense. When Carmelo plays better off-ball defense he stays out of bad defensive position and stays out of foul trouble. But, like I said, Lamar Odom is incredibly versatile, so for Carmelo Anthony to give the Nuggets the most out of this match-up he needs to try and match Odom’s versatility in whatever form possible.

At the power spot: The match-up between Kenyon Martin and Vladamir Radmanovic is an area where the Nuggets can really take advantage. Kenyon is far more explosive, scores more, and rebounds better than Radmanovic, but is sometimes his own worst enemy. Martin out scores Radmanovic 12.4 points to 8.4 on any average night, and almost doubles the Lakers’ starting power forward in rebounds 6.5 to 3.3. But, Kenyon can maximize his effect on this series by getting the most out of his defensive presence. This means when K-Mart has to foul he needs to make sure to eliminate any three-point opportunities. He has some of the strongest hands in the league which means a tendency to reach, but that’s a risk that needs to be calculated, and when he does foul, he needs to make sure it’s not ticky-tack. Otherwise, I like Kenyon’s toughness opposed to the finesse game of Vlad-Rad over the duration of the series.

In the middle: Marcus Camby is by far and away the better rebounder and shot blocker in comparison to Pau Gasol, but it’s his inconsistency on offense that gives the Spaniard the edge in this match-up. Pau’s averaging 18.8 points and 7.8 rebounds for the Lakers whereas Camby is checking in with averages of a very inconsistent 9.1 points and a clockwork-like 13.1 rebounds per game. Most of Camby’s blocks come from the weak side and usually off of poor perimeter defense by his teammates. On the other hand, Gasol is as solid and as retro of a center as there is in today’s game. He can work the post with the junior hook with either hand and is not adverse to shooting a mid-range jumper when left unattended. Pau is also a very underrated passes with a season average of 3.5 assists of which he records most of his dimes off passes out of the blocks to open three-point shooters.

The sixth man: Forgetabouit! J.R. Smith is the most explosive player in the league without a single start during the regular season. With 13 20+ point performances (more than any other player without a single start), including a 43-point explosion against the Bulls, a three-point shooting percentage of 40%, and a scoring average of 12.3 points he averages better than three points more than any of the Laker reserves. For the most part, Phil likes to bring Luke Walton off the bench first for his versatility, but Luke is a far cry from his daddy and would be wise to not stand underneath the basket when J.R. comes soaring in! A huge advantage is there for the Nuggets, but it’s a matter of how heady J.R. Smith, sans the headband, plays. When he plays smart, his athletic ability can be something special to watch, but when he tries to hard and relies on his athletic ability while not utilizing his mind and his teammates things can get really ugly quick for George Karl’s favorite whipping post.

Overall, for a 1-8 match-up between a Lakers team that swept the Nuggets 3-0 in the regular season I think we are all in for an incredibly hard-fought series that could go either way. The Lakers may have the best player on the planet in Kobe Bryant, but the Nuggets have a far more balanced attack with their two superstars. Both teams have great role players like Linas Kleiza and Jordan Farmar and both teams were tremendous in their own buildings in the regular season. The Lakers were 30-11 at the Staples Center while the Nuggets were a stout 33-8 at Pepsi Center leaving me with this final insight:

The team that can steal a win in the other team’s building is going to win this series. Denver gets the first crack at taking the home court advantage away from the Lakers and if they are able to do so while defending Pepsi Center there is no doubt in my mind that an upset is not only possible, but rather probable. However, it's also going to be a matter of which Nuggets team shows up to play each night. Denver has proven able to beat ANY team in this league on ANY given night in the regular 82, but unfortunately has also shown capable of losing to ANY team in the league on ANY given night too.

Nuggets bus caught fire on the way to the game??? WTF... is that some kind of sign... Hopefully, it lit a fire under their asses and we're starting off off with a victory...