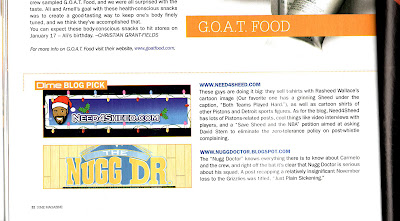 (Boulder-CO) It has been brought to my attention by Natalie over at http://www.need4sheed.com/ and Ryan at http://www.hoopsaddict.com/ that each of our sites have been collectively featured in this February's edition of Dime Magazine! In a section titled, "Dime Blog Pick" one of the best hoops mags has this to say about what has been going on around here, "The 'Nugg Doctor' knows everything there is to know about Carmelo and the crew, and right off the bat it's clear that Nugg Doctor is serious about his squad. A post recapping a relatively insignificant November loss to the Grizzlies was titled, 'Just Plain Sickening'."
Let me just say this... it feels real good right about now on the eve of The Nugg Doctor's first birthday. Big props goes out to Natalie and Ryan for also making the grade in this month's edition of one of the greatest hoops publications on the planet!