Don’t Even Think About It 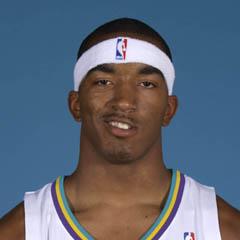 (Boulder-CO) Tonight the Denver Nuggets play the Los Angeles Clippers to finish out the preseason and hopefully for a little revenge. Tonight’s game is merely a side story really because there is a rumor going around that J.R. Smith might be on the trading block. Before I put this rumor under the microscope, let me just say that this would be the most ridiculous move the Nuggets could make at this point after watching J.R. in his last two games. The sky is the limit for the young offensive weapon, and I pray that the Nuggets keep him around.
Marc J. Spears, staff writer for the Denver Post, is responsible for the rumor. Spears writes in today’s edition, “One potential sign that the Nuggets, Lakers or both are getting some trade interest was a few Eastern Conference teams scouting the game. Atlanta, Detroit, Cleveland, Toronto and Miami were in attendance checking out Nuggets guard J.R. Smith. The Nuggets also have a commodity in excess big men”.
I have no problem with teams being interested because I think that J.R. could be the off-season’s best pick up. What I do have a problem with is the Nuggets potentially entertaining offers for him before they even know what they got. The wrap sheet on J.R. is he only needs a second chance to prove himself. Denver could be that place and George Karl could be the right coach to facilitate his proper development. After what I have seen so far, that development could be a short term project. J.R. has hit eleven threes in his last two games and has been showing desire to play pressure defense by denying the wing more consistently and sticking his man a few times.
By keeping J.R. Smith and continuing to allow him to develop in an ideal situation in Denver, the Nuggets are sure to not be last place in the league in three point percentage again this year. When the game necessitates a defensive specialist the Nuggets have the Yak to turn to, but please I beg you Stan Kroenke, do not get rid of J.R. quite yet.
Posted by Nugg Doctor at 2:21 PM

Presumeably, the Nuggets would have to get a shooter/2 guard in return, or else trading J.R. makes no sense.

I would hope so... Getting anything else but a guard in return would make me question the sanity of the front office.

Who ever originally wrote this rumor is an idiot. Detroit looking at J. R. Smith..., ha. We already have Rip to start at the shooting guard spot, along with Delfino, Dupree, and even Murray if needed to back up at this spot. Sure, many other teams might be looking at him, because he is no doubt a good player. But Detroit is more than likely not even thinking about picking up J. R.

Good to know because I do not want to see J.R. go anywhere.