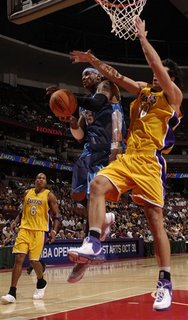 (Boulder-CO) The Denver Nuggets wasted no time showing that they are for real in their national TV debut. Granted they were playing the Kobe-less Los Angeles Lakers, but all signs are pointing to the Nuggets being on the up and up. With so many pieces of the puzzle fitting together tonight, it was no surprise that the Nuggets disposed of the Lakers 126-108.
Carmelo Anthony was offensively brilliant tonight and ended up being the game’s high-scorer with 32 points in 31 minutes of playing time. He was aided by a narrow miss of a triple-double by Andre Miller, who chipped in with 14 points, eleven assists, and eight rebounds. Other major contributors for the Nuggets were Linas Kleiza with 19 points and three boards, J.R. Smith with 14 points while going 3-8 from long distance, and Earl Boykins adding 14 points and four dimes.
On the offensive end the Nuggets were really getting out on the break and pushing the tempo of the game. Obviously by scoring 126 points the Nuggets were shooting a high percentage, (60%), which indicates that the Nuggets were getting to the hole and finishing said fast break. At certain times in the game the sea level Lakers looked winded as the high-octane, and high-altitude, Nuggets kept pushing the ball relentlessly. Needless to say, it worked out great for Denver.
On the defensive end the Nuggets dominated the glass and out rebounded the Lakers 51-31. Only Reggie Evans recorded double-digit rebound totals (10), but the rest of the Nuggets all did their part as many Nuggets had seven or more rebounds in the game. The Nuggets also limited the Lakers to 47% from the field, and anytime you can keep an NBA team under 50% that shows that your defensive effort was solid.
The Nuggets now only have one more preseason game remaining and it happens to be a warm-up match with the Clippers before both teams meet again to kick off the regular season. I’m going to be on the lookout for any, and I do mean ANY, funny business between Chris Kaman and Reggie Evans and I don’t think there needs to be any explanation as to why. Nice work Denver, now its payback time!
Posted by Nugg Doctor at 11:00 PM

I want to know why the hell 'Melo only gets 3 rebounds??

Good question that I have no answer for. Body up on the glass, 'Melo!