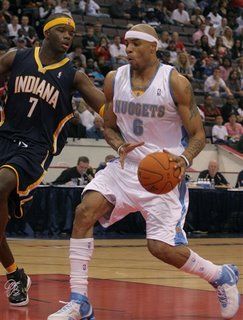 (Boulder-CO) Before Kenyon Martin left the floor in the third quarter with a serious charley horse he was showing glimpses of his previous years. Attacking the basket with reckless abandon, hitting the boards, and even cashing in from long distance was a treat for any Nuggets fan to savor.
The Nuggets bounced back and redeemed themselves after they lost to the Warriors last week with a win tonight over the Pacers 114-102. Carmelo Anthony didn’t play due to his wisdom teeth, but the rest of his teammates picked up the slack. K-Mart went for 20 points, eight rebounds, a steal, and a block. Other notables for the Nuggets were Andre Miller with 13 points and seven dimes, and two players that didn’t get the start, Earl Boykins and DerMarr Johnson. Both players scored eleven points in the win.
On a side note, and it seems to be those kind things that strangely shape outcomes, this was a homecoming for both DJ and Kenyon because the game was held in Cincinnati, Ohio. Coincidentally, both men played their college ball at University of Cincinnati and probably had friends and well wishers at the game. They certainly didn’t disappoint and were both impressive in the first victory against an NBA foe for the Nuggets.
Next up in the Denver preseason campaign are the Milwaukee Bucks. The Nuggets will be the visitor when both teams meet on this Saturday. I didn’t get to predict the outcome of this game because of other business, but I send my apologies for the stagnation today on The Nugg Doctor. Tomorrow will feature numerous posts chalked full with analysis of the roster situation, more previews from around the NBA blogosphere, and without a doubt my prediction for the Bucks match-up.
Posted by Nugg Doctor at 9:27 PM

I noticed from the Yahoo box score that J.R. didn't play at all (along with Marcus). Any idea why that is? I figured George would want to get as much face-time with J.R. as possible before deciding on a starter at the 2 spot. I'm going to the Jazz game, and hopefully he'll be active so I can see what he can do in person.

According to the boxscore at www.espn.com, J.R. did play and scored nine points in twenty-one minutes of action. Marcus Camby did not play because of plantar fascitis in his left foot. Enjoy that Jazz game.

I hope Marcus gets that stuff straightened out -- that nearly ruined Tim Duncan's season last year... He's my favorite player and entirely too important to be hurting again this year. He's got to get a DPOY award eventually -- if he was healthy, he would've gotten one last year.

Good to hear about J.R. -- I was worried for a minute there. It was also nice to see that K-Mart is playing at a high level, though leaving before the end of the game again won't help his value (in terms of trade or otherwise).