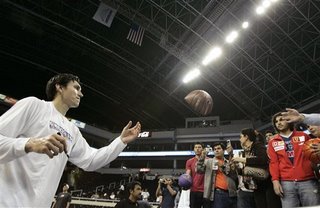 (Boulder-CO) As I reported last night, the Denver Nuggets lost to the Golden State Warriors 121-115. There was no box score last night, but this morning it was staring me in face. Some surprising numbers are recorded by some players, some not so surprising numbers by others. The game was not televised nor was there a real-time play by play so the arduous task of examining the numbers without seeing a minute of the game is a task for yours truly.
Carmelo Anthony led all Nuggets in scoring by posting 25 points in 27 minutes. He was complimented by J.R. Smith and Linas Kleiza both scoring 18 and Earl Boykins and Andre Miller also chipped in with 15 each. J.R. Smith was a respectable 4-8 from three-point land and his counterpart Linas “The Menace” was 3-5 from downtown.
The defensive monster for the Nuggets was, guess who, Marcus Camby. Marcus squeezed ten rebounds, rejected six shots, and swiped two steals in a meager twenty minutes of playing time. Nene did not play, and Kenyon Martin made a small splash with eight points and eight rebounds, but was a confusing 0-3 from three point range. Maybe there was some entertaining going on for the good folks in Monterrey, but I do not think that Kenyon Martin is the guy the Nuggets want bombing from long range.
Anthony Roberson torched the Nuggets for a game high 28 points and had a side kick in Baron Davis who scored 18 and dished for seven assists. This loss should sting for the Nuggets. They will have until Wednesday of next week to think about it and get the kinks worked out before they host the Indiana Pacers at the Pepsi Center.
The game was back and forth with the Nuggets trailing by as many as eleven at halftime due to a 41-point second quarter explosion by the Warriors. When all was said and done, the Nuggets turned the ball over three more times than G-State, shot a worse three-point and overall field goal percentage, had less total team rebounds, and were bettered by one assist. Not the outcome I really wanted, but hey, not the end of the world either.
Posted by Nugg Doctor at 7:39 AM

Maybe K-Mart wants to become that outside shooting, mobile big man that is so hot right now.

Nugg Doctor said...
This comment has been removed by a blog administrator.
2:47 PM

K-Mart should just plan on being available to play every night. Then he can work on the long distance game. I stil think he has got some of the most explosive hops in the game though!

I was just glad to see (well, read about) somebody knocking down some long-distance shots for my Nugs. Hopefully JR will be consistent from deep because I don't think Kleiza will get more than 15 minutes/game. Hopefully 'Melo can get going from deep also -- if he adds that part of his game (which he did a bit last year), he'll be pretty unguardable.

I'll be at the pre-season game against the Jazz, so I'll hopefully get a good look at these guys in person. I'm really excited for JR Smith -- I agree with you about him having a good season, and I think he's going to be in the running for Most Improved Player this year. I'm absolutely shredding people with him on NBA 2K7, whatever that's worth.